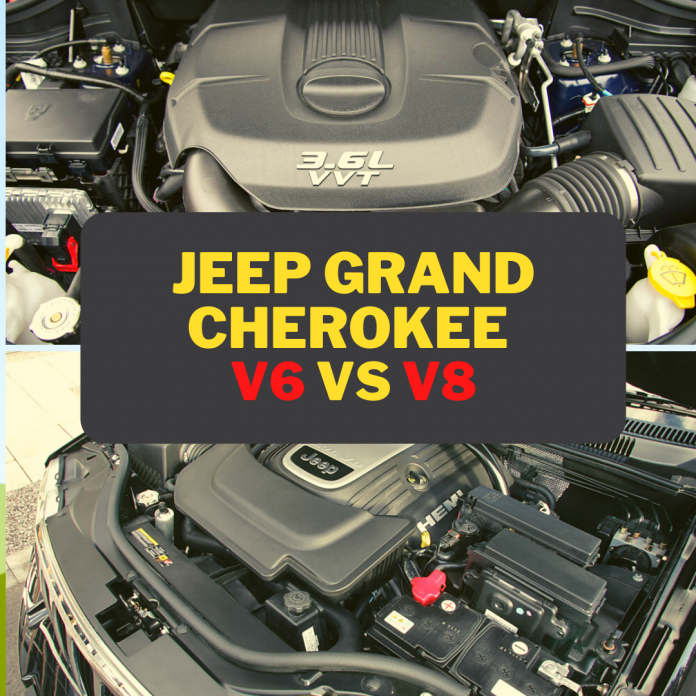 In this article, I take a look at the differences between the Jeep Grand Cherokee V6 vs V8 engines.

Having considered a Grand Cherokee for a while I was keen to see what the main differences between the two engines were. When I read online and spoke to owners, there are certainly a lot of personal opinions, especially when it comes to loyalty for the 5.7L Hemi V8 engine.

However, I wanted to research the facts, so in this article, I look at the key comparisons of the Jeep Grand Cherokee V6 vs V8 including performance, towing ability and off road capability, but first let’s dive into the history of these two engines.

A V8 engine has been available in the Grand Cherokee since the 1st generation ZJ models. However, the 3.7L V6 only came along in 2005 with the launch of the 3rd gen WK, before that a straight 6 engine was an option The lineup for the WK series included a 4.7L V8 along with the 5.7L Hemi.

The launch of the 4th generation WK2 series in 2011 saw the 4.7L V8 engine being dropped and the introduction of the all-new 3.6L V6 Pentastar engine. The 5.7L Hemi V8 continued and was joined with the larger 6.4L Hemi V8 found in the SRT8 and the monstrous 6.2L supercharged Hemi V8 that made its way into the Trackhawk. The 3.6L V6 Pentastar engine was launched by Chrysler group in 2011 and found its way into many Chrysler, Dodge and Jeep models. The Grand Cherokee (and Dodge Durango) had an upgraded 3.6L V6 Pentastar engine in 2016, which had a significant number of mechanical upgrades including two-stage variable valve lift, new intake manifold, new ignition coils and new fuel injectors. Power only increased slightly though, from 290 to 295 bhp with torque remaining the same at 260lb ft.

Chrysler launched the 5.7 V8 Hemi for the 2002 model year and in 2009 upgraded the engine to feature variable valve timing (VVT), revised cylinder heads to increase flow and model specific intake manifold changes, with the Jeep application having a passive intake manifold.

If you would like your Grand Cherokee to look more like the SRT8 or Trackhawk models, then it may be worth looking at the black front grill ring insert kit we found from JeCar. The price won’t break the bank and it does give the car a more sportier look that the standard chrome insert. 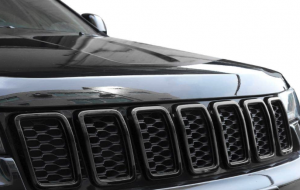 The ultimate V8 (and most powerful Chrysler engine) is the 6.2L supercharged Hemi V8 launched in 2015. This engine had the same bore as the 6.4L but the stroke of the 5.7L and is fitted with a twin-screw IHI supercharger unit. The power output on this engine is a whopping 707 bhp with 650 lb ft of torque. This engine was exclusive to the Trackhawk in the Jeep Grand Cherokee range. For the rest of this article, I will assume that people are comparing the 3.6L V6 Pentastar with the 5.7L V8 Hemi, and not the 6.4L and 6.2L Hemi variants as these are less commonplace. I’ll include their facts though where appropriate just for interest.

Torque in the V8 is 130lb ft higher in the V8 which is an impressive 50% higher than the V6. So in terms of power and torque, the V8 wins comfortably. The 3.6L V6 is no slouch though and still delivers an impressive 0-60 time of around 7 seconds, despite its weight and bulk. The V8 is only marginally quicker off the line with a sub-7 second time, depending on trim and specification.

If you want higher performance then take a look at the SRT8 or Trackhawk. The SRT8’s 6.4L Hemi puts out 475 bhp with 470lb ft of torque, whereas the 6.2L supercharged Trackhawk delivers a mighty 707 bhp and 645lb ft of torque. 0-60 mph in the Trackhawk is supercar quick and is achieved in 3.5 secs. The Trackhawk’s top speed is 180mph if you dare to go that fast in a car this size.

Let’s be honest, you are probably not going to be looking at the V6 or the V8 if fuel efficiency is top of your agenda. The V6 achieves 19mpg in city driving and 26mpg highway and features stop-start technology to save fuel when standing in traffic. This seems realistic as I found owners that achieve the exact 18mpg in the city and 23-24mpg on the highway.

The 5.7L V8 suffers more in town driving and only manages 14mpg, although it does do slightly better on the highway with 22mpg. Again, this is confirmed by owners who achieve around 13.5mpg in town and 22-23 highway MPG. The V8 does have Fuel Saver Technology which is basically cylinder deactivation. This shuts down 4 cylinders when cruising at a steady speed, during low gradient climbing and under light acceleration.

If you are driving a lot on the highway then there is not much to compare the 26mpg of the V6 and the 23mpg on the V8, mainly due to the cylinder deactivation tech on the V8. If lots of town or city driving is normal for you, then the V6 wins with its 18mpg versus 13-14mpg on the V8. Overall though, you will save money on fuel in the V6 but not by a significant amount.

The SRT8 and Trackhawk aside, the Grand Cherokee is not a track day car. Both cars are heavyweights, with the V6 weighing in at 6,500 pounds and the bigger engined V8 coming in at 6,800 pounds This a 300 pounds or 5% increase, so not a significant win for the V6.

The V8 has slightly larger diameter (13.8” vs 13”) front brakes than the V6, and slightly thicker (0.87” vs 0.55”) diameter rear brakes, although the V8 does gets both vented front and rear brakes, whereas the V6 makes do with vented discs at the front only. A slight increase therefore in braking spec on the V8 to counteract the extra weight and performance. Both cars have exactly the same front and rear suspension setup.

Towing will definitely be of interest for many people looking to buy one of these cars, so how much can the Grand Cherokee V6 and V8 tow? The latest Jeep Grand Cherokee brochure gives the maximum trailer towing weight of 6,200 lbs for the V6 and 7,200 lbs for the V8 engined cars. So, the V8 is up 1,000lbs in towing capacity or 16%, on the V6, so definitely consider the V8 engine if you have heavier towing requirements.

Both the V6 and V8 Grand Cherokees have found a decent fan base amongst the off roading community. The V8 will always be the superior model off road due to its increased power and torque over the V6. However, remember that the 3.6L V6 is the same unit as found in the Jeep Wrangler and Renegade, and although lighter, these models have more than adequate off road performance.

So when it comes to off road capability, the V6 is more than adequate, although if you are planning on loading up your Grand Cherokee with gear (such as for overlanding) then it will be worth considering the more powerful V8.

When it comes to reliability, both engines fare okay. The V6 has been used in a wide range of vehicle applications across the Chrysler brands and they have proven themselves to be reliable.

The V8 engine can have the “famous” Hemi tick, especially on start up and when cold, though this usually disappears when the engine warms up. It can be a bigger (and more expensive) issue if the 5k mile oil change intervals (using premium oil) are not kept up to. Checking on carcomplaints.com, the years to avoid on the Grand Cherokee in general are 2011 and 2014 as these were notorious for engine (2011) and transmission (2014) problems.

Overall, having looked around and speaking with owners, the V6 has less-known issues than the V8.

The Jeep Grand Cherokee can be considered a large, premium SUV and new prices reflect this. At the time of writing, the cheapest V6 I could find brand new was the Laredo E 4×2 with a net price of $36,140. In comparison, the cheapest brand new V8 engined car is a Trailhawk at $48,960 net.

So you are looking at over $12k extra for a brand new V8 versus a V6, although the Trailhawk is a much higher spec than the base Laredo E.

On the used car market, the cheapest 4th gen V6 I could find on autotrader.com was a relatively new 2018 Limited at $29,715 with 67k miles on the clock. Looking at V8s, the cheapest was a 2011 Laredo with 261k miles at $8,514 and there definitely seemed to be a lot more cheaper V8s available if you are prepared to accept the high mileage.

When it comes to choosing between the V6 and the V8 Grand Cherokee, based purely on facts, it’s not easy. The 5.7L V8 wins in some areas due to its larger engine capacity, including engine performance, towing capability and, to some degree, off-road performance.

The V6, while down on power and towing capability, makes up for it in fuel efficiency and the lower new list price.

If it’s a heavy duty towing vehicle you are looking for then the V8 is the winner but if you are driving a lot in a city or town then you might want to forego the V8’s power for the V6’s fuel efficiency. Some owners will just “want” to have the V8, so a lot comes down to emotional choice.

For me, I would take the hit on costs and go for the V8!

What to do next?

I briefly touched on reliability in this article but if you want to know more then check out our guide on how many miles a Grand Cherokee can last. Also, if you have bought a Grand Cherokee and are looking to customise it, or simply protect it, then we also have this covered in our how much does it cost to wrap a Jeep Grand Cherokee article.