Honda lists all of its ATVs under a range known as ‘Honda Powersports’. Their ATVs are broken into two categories.

You have the Rec ATVs, which have been designed for casual and business use. If you are looking for a utility ATV that can be used to make your work life a little easier, or perhaps an ATV that has been designed to have safe fun in mind, then any of the five products in the Rec ATV range could be good.

You also have the Sport range, which has been built for speed. The sport range of vehicles are slightly lighter, which helps them to travel off-road at a blazingly fast speed. There are only two products in the Sport range (as of 2020), but both of them are brilliant.

All Honda ATVs sold in the United States are built in South Carolina. Next up is Yamaha. Just like Honda, their ATVs will be split into two categories; Rec/Utility and Sport. Their range is a little bit larger than that of Honda. Their utility range has ten options available, while their sport range has seven vehicles available.

Yamaha stands out from Honda as they have a few ATVs designed for children in their range. They also have the best-selling ATVs, not just in Japan, but across the world.

In the past, Yamaha ATVs would have been made in Japan. However, a few short years ago, manufacturing for the ATV range was shifted over to the United States. There are several Yamaha manufacturing facilities in the country. Most of their vehicles will be constructed in either Tennessee or Georgia. 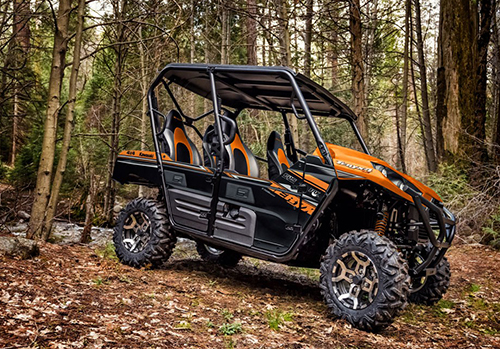 And last by not least for our Japanese side by side UTV comparison is Kawasaki.

All the ATVs in the Kawasaki range have been designed to be used as utility vehicles. They have no sport vehicles. The Kawasaki range is also a bit more limited than that of the previous Japanese manufacturers. Their ‘adult’ range of vehicles only has two options, and they are really variants on the other. Although, some people will likely see this as a good thing. It means Kawasaki has been able to focus on making one model brilliant, rather than trying to ensure 5-10 vehicles perform to a high standard.

Kawasaki also has a children’s ATV available in their range.

It is hard to pinpoint where Kawasaki ATV products are made, this is because Kawasaki does shake things up on occasion. However, it seems that the bulk of the products destined for the American market are made in Lincoln, Nebraska. However, some people have reported that their ATV has come from one of the other Kawasaki manufacturing facilities. They have them all over the world, with several in Japan and the Philippines.

For more information on choosing the right UTV, check out some of our other buying guides:

Polaris Ranger vs John Deere Gator: How Do They Compare?