The Hyundai Santa Fe is a well-known SUV that has been on the market for over 20 years. It was first released in 2000 and has had several different models since then, but it remains a popular vehicle among many car buyers.

The Hyundai Santa Fe is one of Hyundai’s most successful vehicles because of its ability to change from an SUV into a minivan by removing the third row seats with just two quick moves!

This article will explore everything you need to know about this popular model and what makes it so desirable among drivers.

Is a Hyundai Santa Fe reliable?

When it comes to reliability, the Hyundai Santa Fe is a mixed bag. Hyundai is known for producing reliable vehicles, but the Santa Fe does have a number of high complaints years (see below) with the 2007 to 2009 production period of the second generation model suffering with the highest number of complaints.

As far as Hyundai models go, you can expect an average of 145,000 miles before major engine repair becomes necessary. Obviously, this all depends on how well the vehicle has been previously maintained.

What is the most reliable year for Hyundai Santa Fe?

When looking at owner complaints, the best year for Hyundai Santa Fe production is 2006, with the main problem being around the airbag light staying on. 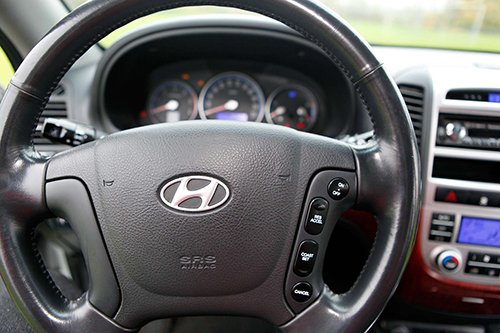 The best years are from 2009 onwards when Hyundai made changes to improve fuel gauge readings as well as a number of other small quality improvements that meant complaints dropped off substantially.

In general this vehicle has been designed to be reliable and durable so you can expect it to last a long time as long as it continues to be well maintained.

If you are looking at buying a used Hyundai Santa Fe then there are some years that have very high numbers of complaints, these are the years that you should avoid.

The worst production year is 2007, in fact the period between 2007 and 2009 was particularly bad in terms of number of complaints reported. One of the main problems during this period was that the fuel gauge was not reading correctly which had the potential to leave many owners stranded without fuel. Hyundai is now aware of the problem and Hyundai Santa Fes in this period have been fixed.

What are the most common problems with the Hyundai Santa Fe?

The 2008 Hyundai Santa Fe has been a headache for many owners with its fuel level sensor failing. The problem can cause issues such as warning lights and messages on your dashboard to warn you of an empty tank when there are still plenty of gallons left in it!

When it comes to rust, the Hyundai Santa Fe is a mixed bag. Hyundai’s Santa Fe has a galvanised metal body, but there is evidence that some vehicles suffer from rust problems due to galvanic corrosion and poorly castings of the vehicle frame. Hyundai dealerships have reported being able to identify which models are more prone to corrosion with an acid test on their paintwork.

If you are buying a used car then always check for rust underneath the car, especially around the sills and wheel arches, as this is where Hyundai Santa Fes are most likely to be affected by rust.

If you have a Hyundai Santa Fe that has developed rust then it’s worth getting the problem fixed at your local Hyundai dealership before any further damage can occur. You might be in luck as Hyundai may cover rust repairs under warranty. Hyundai’s anti-perforation warranty is good for 7 years and unlimited mileage, but only covers cars made from 2005 onwards .

Hyundai also offer a rust warranty for cars made from 2000 to 2004 which covers the panels underneath the car, although this warranty may depend upon the condition of the car and would be subject to an inspection by the dealership.

Is the Hyundai Santa Fe expensive to maintain?

Looking at maintenance cost, the Hyundai Santa Fe is not an expensive vehicle to maintain. Hyundai Santa Fes are also regarded as some of the more reliable vehicles on the market, which is a good thing considering how much they cost when compared with other SUVs.

Apart from regular service item costs such as oil changes, Hyundai Santa Fe owners can expect to pay about $210 for an air filter replacement. This is one of the more expensive service items on a Hyundai Santa Fe but well worth it considering how important these filters are in preserving your engine performance and lifespan.

Also ensure that oil changes are carried out regularly if you don’t want to end up with a Hyundai Santa Fe that has expensive repair bills further into ownership.

Were there any major recalls on the Hyundai Santa Fe?

In total there have been 29 NHTSA safety recalls on the Hyundai Sante Fe to date. The most common issues for recalls is problems with airbags, including issues with sensors and mounting points.

Another serious issues is a problem with the seat belt where the seat’s height adjuster mechanism may leave the front seats vulnerable to wear and tear on their wiring harnesses, potentially resulting in an inability for the car to warn passengers when they are not wearing a safety belt.

What are the best alternatives to the Hyundai Santa Fe?

It is also worth looking at some alternatives to the Hyundai Santa Fe, these include the Honda CRV and Toyota Rav 4, both of these SUVs are comparable to the Santa Fe.

The Honda CRV is a worthy alternative but does not have the seven seats as found on the Santa Fe. The Rav 4 is well known for its reliability although is slightly smaller than the Santa Fe.

In summary, the Hyundai Sante Fe is a reliable and affordable vehicle. Hyundai has been around since 1967, so it makes sense that they’ve figured out how to make quality cars. The Sante Fe is a great purchase for any buyer who wants an SUV with low maintenance costs and good gas mileage. The Sante Fe is also great a towing.

How Many Miles Can a Hyundai Tucson Last? Are They Reliable?